All Collections
Lists
Segmenting
Condition Groups in the Segment Builder

Condition Groups in the Segment Builder

One of the most exciting features in our advanced segment builder is the ability to use "condition groups". You can then use these “group conditions” to contrast them off of each other to build a segment. You can even nest groups inside of groups.

Doesn’t make much sense yet? Well, let us look at an example. 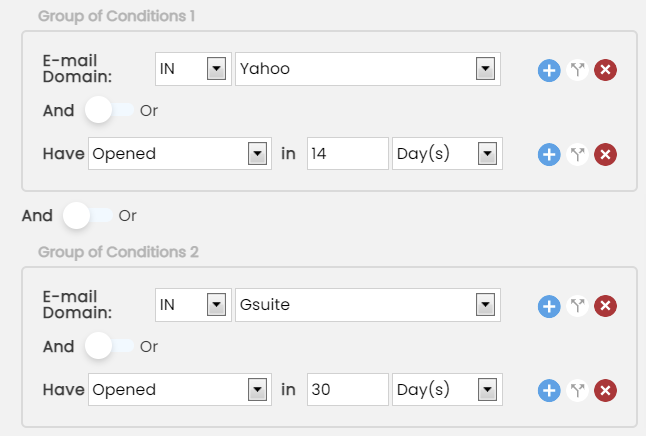 This image should be rather self-explanatory, but let me translate what it does, just in case.

And we’re telling the Emercury system to build a segment out of both groups. It is one segment that contains both types of subscriber. This is only possible with the new condition groups functionality.

Either that, or we had to compromise and have a single segment that included all Gmail and Yahoo users who have opened an email in the last 22 days or something similar. That is not ideal when you’re trying to get peak deliverability.

With condition groups we no longer have to make any compromises.

How to use Condition Groups

We've worked very hard to make condition groups very intuitive, and you will get them in no time. The best way to show you how to use them is to build the example from above.

Let's say that we click on the new segment option, and get a blank segment builder screen.

I would start off by adding a single condition on there. In this case the "Yahoo" domain condition.

Just click on domain groups, and then choose Yahoo.

Next, I would want to convert this into a condition group so I can add other conditions that would go in the same condition group. I do this by clicking on the icon in the middle.

Now that we have a group, we can add more conditions to the same group. You can just click on the plus icon like so.

This will trigger a pop-up that asks us what kind of condition we are trying to add to the group. In our case here we are going to choose "Behavioral", because that's where the "opened emails" behavior is.

Voila, we have our first conditions group made up of two conditions. It has one condition to define the domain group. And another behavioral condition.

However, at this point the second condition is still undefined, as you have to make sure it is set to the right behavior and timeframe.

Note that it defaults to "Been mailed". So unless you are indeed looking for "been mailed" as your condition, you will need to change that to your required behavior.

Note that in our case here we want the person to both have opened an email in the last 14 days and be a Yahoo subscriber. So we left the switch to "And" as it is by default. If however you have a situation where you want to meet either criteria (doesn't have to be both), you would flip the switch to "Or".

Now, if you repeat the same process, you would build a second condition group in the same way. You would just add a condition "In Gsuite", convert it to a condition group, and add the "opened in 30 days" behavior inside of that group. 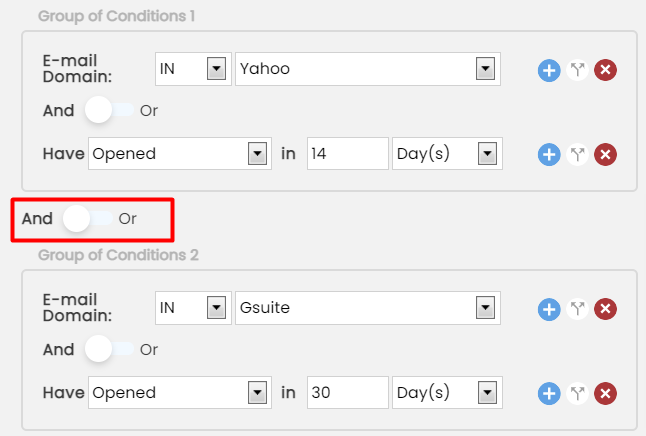 Just note that there is a switch in-between the condition groups. In our case we want both to be included so we left it at the default "And". But you could set the switch between condition groups to "Or" if necessary.

Now, if you wanted to get really fancy, you could have condition groups, inside of condition groups. Let’s use the example from before so I can show you what I mean. Let's say I want a condition where people are either Gsuite OR Google users AND they have opened an email in the last 30 days.

I would just click on the group creation icon next to the condition which currently says Gsuite.

And now, I have a subgroup inside of a group.

I would now click on the plus Icon next to the condition singling out Gsuite users, so that I add a new condition inside of this subgroup.

I would choose Domain group from the pop-up screen. 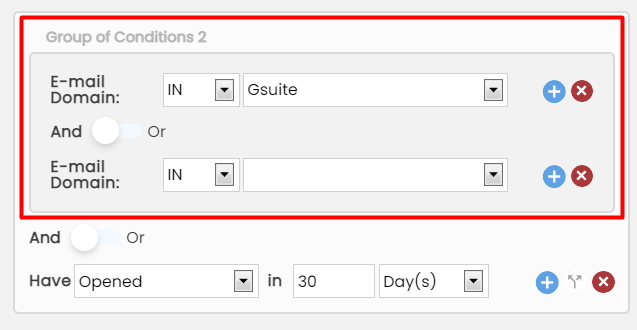 And I end up with a subgroup that has two domain-group-based conditions. The first one is from before, so it is still defined as Gsuite. Just need to define the new one now. 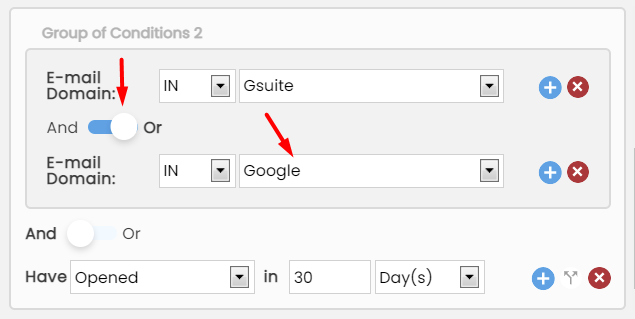 I would choose Google from the dropdown on the second condition. And I would flip the switch between the two conditions to "Or". Because we want subscribers that are either in Gsuite or in Google. 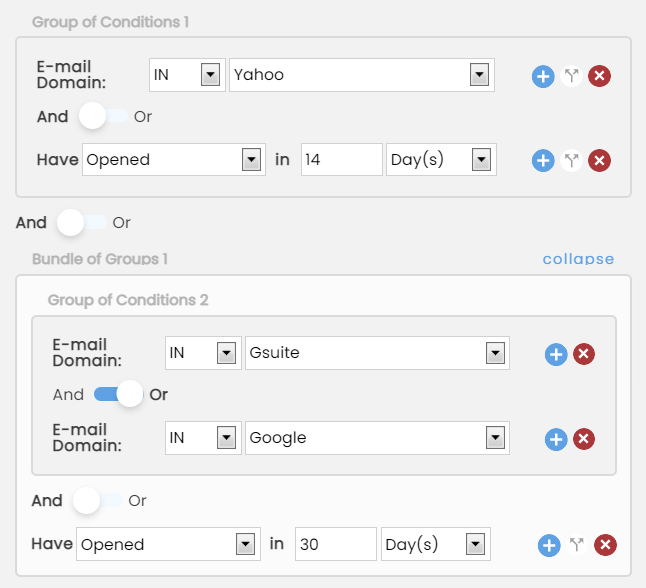